SCALE(Scalable Computing for Advanced Library and Environment) is an open-source base library (*) that is used to conduct numerical simulations of weather and climate. Its development started in 2010, mainly by the RIKEN Center for Computational Science (R-CCS) in collaboration with researchers specializing in meteorology and climatology as well as those specializing in computer science and it was first released in 2013.

Work on RIKEN’s supercomputer, the K computer, is expected to be performed on general workstations as well, enabling simpler and faster simulations of weather and climate than those in the existing weather models.

(*) Collection of programs made into components so that they can be called from more than one program.

An example of SCALE application

Dr. Yousuke Sato of Nagoya University is currently using SCALE to simulate the dispersion of the radioactive substances from the Fukushima Daiichi Nuclear Power Plant. For this research, an international project has been established as a collaboration between domestic and overseas research institutes, including Nagoya University. Research institutes in various countries are conducting similar simulations using their own dispersion models.

However, many doubts persist regarding the dispersion of the radioactive substances from the Fukushima Daiichi Nuclear Power Plant due to the 2011 Tōhoku earthquake and tsunami. Thus, studies must be conducted to compare the simulations and results from various weather models.

Based on Dr. Sato’s simulations developed using SCALE, certain past assumptions have been found to be slightly incorrect: e.g., radioactive substances, once thought to be scattered along a straight trajectory between the observation points, were actually found to travel toward the Pacific and return between two observation points.

There is hope that the community of scientists formed around gathering information about simulations based on such findings or comparative studies will be able to quickly provide more accurate information during disasters such as accidents at nuclear power plants that could occur at any time and location. 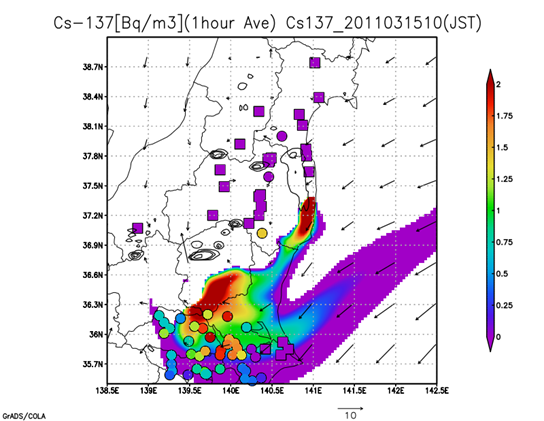 Simulation of the scattering of a radioactive substance（cesium: 137Cs）due to the Fukushima Daiichi Nuclear Power Station accident using SCALE. The shaded area depicts the simulation results and ◯ and □ represent the observed results. The values are depicted as base-10 logarithmic values (unit: Bq/m3).

Advantages of SCALE: quick to start up and independent of the computation environment

Dr. Sato reported that one of the advantages of using SCALE is that simulations can be started quickly. When using the existing weather models, permissions need to be obtained from the relevant governmental offices, software rights owners, etc. However, if the two-clause BSD license (*) for SCALE is used, these steps are not required; anyone can quickly download and use the software. Moreover, the interface, which allows for conditions such as clouds or aerosols (**) to be easily added to the library, greatly reduces the barriers to entry for a user.

Using SCALE, it took about two months for Dr. Sato to start the simulation of the dispersion of radioactive substances from the Fukushima Daiichi Nuclear Power Plant. However, it is generally expected to take between six months and a year to start a simulation like this, demonstrating how fast SCALE is.

Image of use of component groups in SCALE

(*) Open-source software license introduced by the University of California, Berkeley that allows the software to be used for any purpose, including commercial applications. It requires the license text, copyright notice, and disclaimer to be included in the source code or documentation before the software is distributed.

(**) Refers to minute amounts of solids and liquids dispersed in the atmosphere.

Another advantage of SCALE is that it is an independent of environment in which simulations can be conducted. SCALE was mainly developed at the RIKEN R-CCS and used on the K computer; however, in practice, it can be used on university workstations and other computers as long as they meet certain specifications.

A key feature of SCALE is that both Japanese and English manuals have been created in detail so that even young researchers can easily begin the research using this tool. As of December 2017, it is already used in more than ten universities and research institutions.

In the field of science, expansion is limitless

Results of the Mars Dust Devil simulation
Excerpt from the RIKEN press release, available at http://www.riken.jp/pr/press/2016/20160720_2/

Dr. Sato says that the range of applications of SCALE in science is limitless. In addition to the simulation of the radioactive substance from the Fukushima Daiichi Nuclear Power Plant. Dr. Sato also used SCALE to study the diffusion problem of naturally generating radon. He is also applying SCALE for the simulation of clouds or the occurrence of thunder. Other researchers are conducting numerical experiments relating to the rainfall systems in the East Asia and Southeast Asia monsoon regions. An unusual example of potential applications is the recent research being done to characterize the statistical properties of the size or intensity of the Dust Devil that occurs on the surface of Mars; this is done by changing the SCALE parameter used for Earth simulations based on the atmospheric composition of Mars. SCALE can be flexibly used depending on the aim of the researchers due to the simple accessibility and the ease of granting conditions. Thus, it will certainly be used in even more weather simulations in the future.

Currently, SCALE is widely spreading from being used in individual research studies to cooperative projects between industry and academia. R-CCS has also been conducting training courses to expand its base. In the future, the software and manual will be continuously updated to be more user friendly from the perspective of the potential development of various applications through the acquisition of such information.