Basic library for the analysis and simulation of the climate system of the Earth and planets.

SCALE (Scalable Computing for Advanced Library and Environment) is a basic library for weather and climate model developed principally by scientists at the RIKEN Center for Computational Science. The SCALE library was developed as a scalable package that could be used on next-generation supercomputers as well as normal desktops. It was developed jointly by scientists specializing in weather and climate science and by researchers in computational and computer science.

The SCALE is developed in the context of its wide use in climate simulations by devices ranging from small PC clusters to next-generation supercomputers. For this purpose, scientists in meteorology/climate develop SCALE in cooperation with scientists in computer science. This has led to high computational performance of SCALE not only in supercomputers, such as the K computer and the Fujitsu FX10, but also for general-purpose commercial computers, such as Intel processor-based machines. 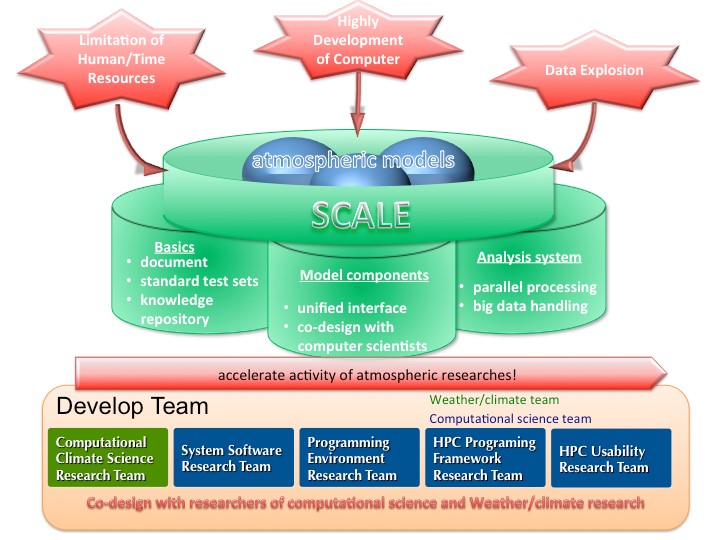 The SCALE-RM and SCALE-GM, numerical models fully using SCALE-library, are available. The SCALE-library manages the parallel processes, file I/O, and inner-communication. It also provides the solver for atmospheric flow (dynamical core) and physical processes such as micro-physics and radiation processes. SCALE-RM and SCALE-GM themselves conduct time-integration by keeping the atmospheric status as prognostic variable and combining functions provided by SCALE-library. Users can select a scheme in every component according to simulations they want.