First of all, let’s download the tutorial file (tutorial19-17.1.zip). In this tutorial, we additionally use the SITUS program package. If you have not installed it yet in your computer, please download and install the program in advance. Hereafter, we assume that the binary programs of SITUS ver. 3.1 are installed in /home/user/Situs_3.1/bin/. Since we use the CHARMM36m force field parameters, we make a symbolic link to the CHARMM toppar directory (see Tutorial 2.1).

1. Making a simulated density map of the target state

Before dealing with a “real experimental” density map, let’s practice the flexible fitting using a “simulated” density map. Here, we employ the glucose/galactose binding protein (GGBP). Recently, the open and closed states of GGBP have been solved with the X-ray crystallography. We would like to create a target density map from the crystal structure of the open state (PDB: 2FW0), and carry out the flexible fitting from the closed state (PDB: 2FVY). Therefore, we know the “answer” of the fitting.

First, we download the PDB file of the open state (PDB: 2FW0), and create a processed PDB file that contains only protein heavy atoms by using VMD.

To generate a synthetic density map from open.pdb, we use emmap_generator in the GENESIS analysis tool. We generate a control file INP using the “-h ctrl” option, and edit the file.

We specify the following parameters in the control file. We create a map with the 5 Å resolution (sigma = 2.5 Å), where the file format is set to SITUS. The variable auto_margin makes a margin between the map edge and minimum or maximum coordinates of protein atoms according to the specified margin_size. Note that the original PDB file (2FW0.pdb) cannot be used as input in this tool.

After running emmap_generator for INP, let’s view the generated density map and open.pdb by using VMD. The following is an example to load the map file by the command line. This can be also done by using a mouse as follows [File > New Molecule > Browse > Select “open.sit” > Load]. 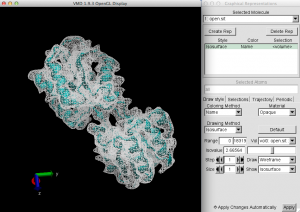 Figure 1. Comparison between the PDB and synthetic density map. Let’s change the representation of the density map by specifying “Wireframe” or by moving a seek bar of the “Isovalues”, which show the absolute value of the density data.

Second, we prepare the initial structure of the closed state (PDB: 2FVY). Again, we download the PDB file and create a processed PDB file that contains only protein heavy atoms:

Let’s visualize proa.pdb and open.sit by using VMD. We can see that the position of the initial structure is significantly shifted from the target density. We have to fit the initial structure to the map as much as possible with a rigid docking protocol before the flexible fitting.  For this purpose, we use the colores program in SITUS (for details, see here). We run the following command, where the resolution of 5 Å and 4 CPU cores are specified. It may take a few minutes for this calculation.

We obtained several PDB files, named col_best_00X.pdb. We should select the best model among them. The cross-correlation coefficient (c.c.) between the target and simulated densities is written in the header information of each PDB file. We see that col_best_001.pdb shows the best c.c., which means that this PDB is the best fitted model.

Let’s compare col_best_001.pdb and open.sit by using VMD to check whether the protein is actually superimposed onto the map.

We obtained closed.pdb and closed.psf. In addition to these files, we make a PDB file with the all-atom model for open.pdb, which will be used for the analysis of the RMSD with respect to the target state.

Before running the MD-based flexible fitting, energy minimization is usually needed to remove steric clashes in the initial structure. The control file is already contained in the directory. Here, we simply perform the energy minimization. We execute ATDYN for INP. After the calculation, min.dcd and min.rst are obtained.

Then, we carry out the flexible fitting. The control file is already included in the directory.

The following shows the most important parts in the control file. You can recognize that the flexible fitting is a kind of “restrained MD simulation”, and most parameters are common with the conventional MD simulations. We apply the biasing potential on the protein heavy atoms, where the force constant of the bias is set to 5,000 kcal/mol. emfit_sigma is a resolution parameter, which is usually set to the half of the resolution of the target density map.

We execute ATDYN for INP. The following is an example to execute mpirun using 16 CPU cores:

After the calculation, we obtain run.dcd, run.pdb, and run.rst, where the PDB file is the structure at 50 ps. The log file contains time courses of the energy and c.c. (Column 19: RESTR_CVS001). Let’s view the trajectory by using VMD. You can see that the structure is well fitted to the target density. 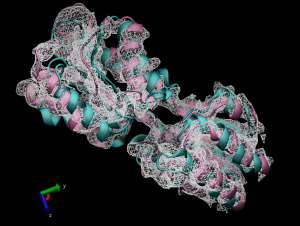 Figure 2. Comparison between the Initial (green) and fitted (red) structures.

First, we analyze the time courses of c.c., which can be easily obtained by using the following command. We select the value in the Column 19 (RESTR_CVS001) in the log file. You can see that the c.c. is successfully increased during the fitting.

Second, we analyze the RMSD with respect to the target structure, because we know what should be the correct “answer” in this flexible fitting. Here, we use rmsd_analysis in the GENESIS analysis tool set, as in Tutorial 3.3. We use target.pdb as reference coordinates. Please, confirm that the number of atoms as well as the order of atoms in target.pdb and closed.pdb are identical to each other, otherwise the atom selection or RMSD calculation cannot be done correctly.

We obtain output.rms. Let us plot the RMSD and c.c. by using gnuplot. We can see that the RMSD with respect to the target state is quickly decreased as the c.c. increased. The c.c. is eventually converged in 50 ps. 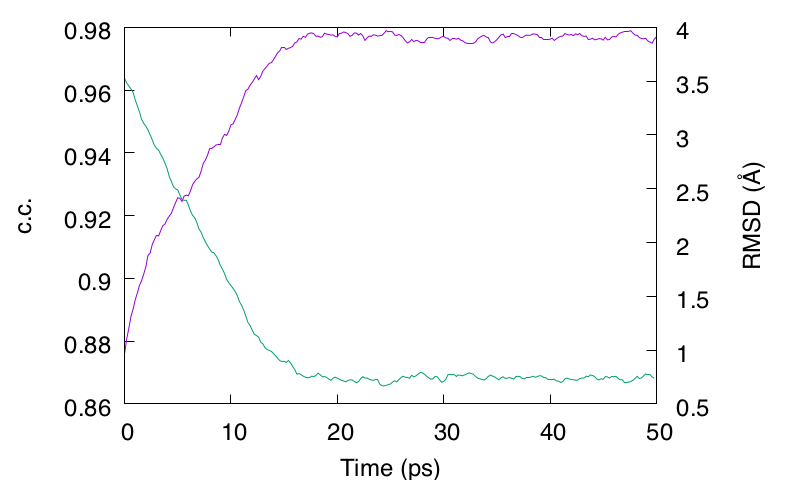 Finally, we evaluate the quality of the obtained structure. One of the commonly used criteria is the MolProbity score [7], which represents how good the structure is as a protein. It can be computed with the GUI server. Let’s access to the MolProbity Server, and upload run.pdb obtained from the flexible fitting.

After the process, we click “Analyze geometry without all-atom contacts”. 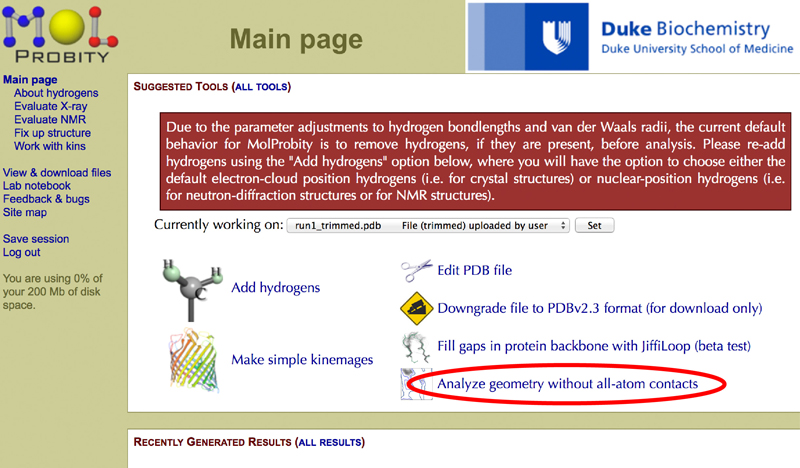 Confirm that the “Clashes & clashscore” for Charts, plots, and tables is checked. 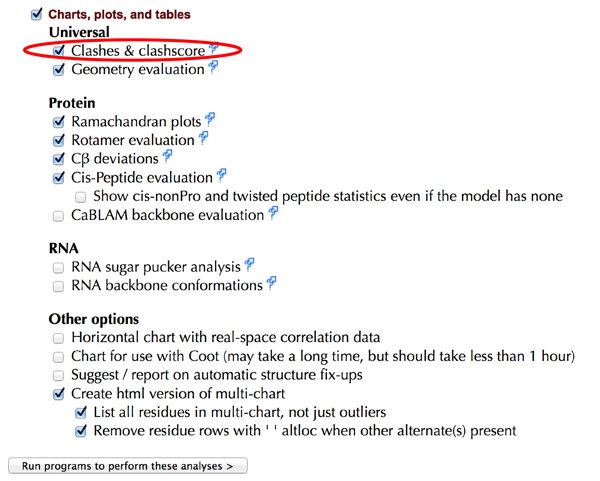