This tutorial describes how to set up a system for all-atom MD simulations using the CHARMM force field. The figure below outlines a general scheme for building a system for soluble proteins. The scheme consists of five steps: 1) prepare the PDB file, 2) remove unnecessary molecules from the PDB and move the center of mass (COM) of the protein to the origin, 3) add hydrogen atoms to heavy atoms, 4) place water molecules around the protein, and 5) randomly place ions in the water. Here, we select Protein G as an example, and solvate the protein in 150 mM NaCl solution. Since GENESIS is not providing a structure setup tool, we will use VMD for this purpose [1]. We will also use psfgen-plugin, solvate-plugin, and autoionize-plugin in VMD.

Let’s download the tutorial file (tutorial19-2.3.zip). When you unzip the file, you can see that there are five directories “1_oripdb“, “2_modpdb“, “3_psfgen“, “4_solvate“, and “5_ionize“, each of which corresponds to each step in the above figure.

We have prepared these five directories to carry out each step. In fact, we will obtain multiple output files at each step, and if we do all the work in one directory, it will be difficult to recognize which file was output in which step. Such situation can lead to accidental mistakes. Therefore, we create a directory for each step and work “sequentially” in each directory. This is one of the effective techniques to keep the directories organized in MD simulation studies.

In Step 3, we need CHARMM topology files. Here, we create a symbolic link to the directory where the CHARMM force field files are stored (see Tutorial 2.2) using the “ln -s” command. Symbolic link is a kind of “shortcut” to the target. It is useful for referring to a directory or file that is far from the current working directory.

Step1. Prepare the PDB file of the target protein

Here, we use the PDB ID: 2QMT, which was solved by X-ray crystallography at 1.05 Å resolution. We have already downloaded the PDB file in Tutorial 2.1. Let’s go to the “1_oripdb” directory, make a symbolic link to the PDB file, and look at the structure in VMD. We can find not only protein atoms but also oxygen of water and other compounds such as phosphate ion, isopropyl alcohol, and methylpentane diol. In fact, these additional compounds were used for crystallization of the protein in the experiment, and are not essential for this MD simulation. Now, we would like to also check the center of mass (COM) of the protein by using the “measure center” command in VMD. We can see that it has deviated significantly from the origin (0, 0, 0). This displacement may be inconvenient when the protein is solvated in a water box (Step 4). In the next step, we are going to remove unnecessary compounds from the PDB file and move the COM to the origin as well. 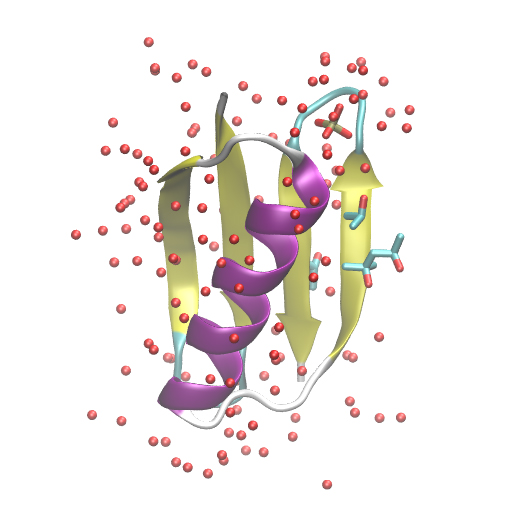 In Step 2, we modify the PDB file in order to set up the system correctly. Let’s go to the “2_modpdb” directory. We can find “build.tcl” in this directory. Let’s take a look at this file with the less command. This is a tcl script, which contains the VMD commands we want to execute. By executing this script through VMD, the following procedures can be performed sequentially and automatically: 1) load the PDB file, 2) change the residue name “HIS” to “HSD”, 3) change the atom name “CD1” to “CD” in ILE, and 4) change the C-terminal atom names “O” and “OXT” to “OT1” and “OT2”, respectively, 5) select all protein atoms, 6) measure the COM of the protein, and 7) move COM to the origin. Finally, write the coordinates of the selected atoms (i.e., protein) to “proa.pdb“. The reason for changing the atom and residue names is that some of the atom and residue names are defined differently in the CHARMM force field than in the general PDB rules, and these names need to be changed to follow the CHARMM rules. The definitions of the names in CHARMM are as shown in the topology file.

Let’s run this script in VMD with the following command. The option “-dispdev text” means to start VMD in text mode, i.e. not to open the viewer window. Once the above script is loaded with “-e build.tcl“, all the commands in the script will be executed automatically by VMD. In the log file, we can see what has been executed by VMD. Look at the obtained PDB file (proa.pdb), and make sure that the COM has indeed been moved to the origin. 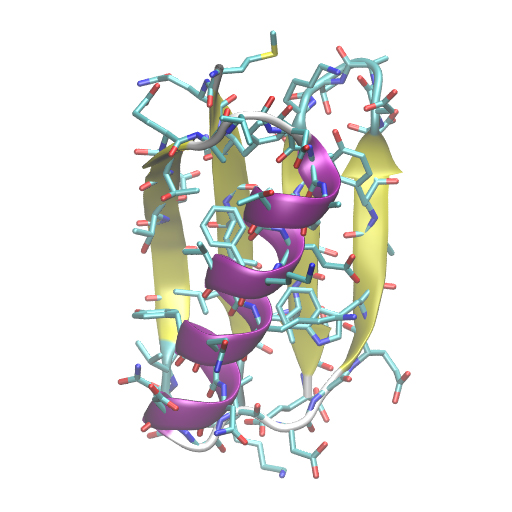 Also, check that the names of the atoms and residues you specified have been changed correctly.

Step3. Make PDB and PSF files of the protein

In Step 3, the missing atoms in the protein are constructed, and then, “PSF file” as well as “complete PDB file” are created using the psfgen-plugin on VMD. PSF is a “protein structure file” that contains information about the entire system, including bond connectivity, atomic charge, mass, etc., excluding atomic coordinates.

Go to the “3_psfgen” directory. Again, a script for VMD is provided here. This script first turns on the plugin and loads the CHARMM C36 topology file. Then, a segment name for the protein is defined. In CHARMM, a segment is usually defined as a molecule that has a complete single chain. In this example, we named the protein “PROA“.  The coordinates of each atom in PROA are read from the PDB file (../2_modpdb/proa.pdb), and missing atoms are automatically built with the “guesscoord” command. Finally, the PSF and PDB files are output.

Let’s run this script in VMD, and then take a look at the obtained PDB file (protein.pdb). Here, we load the PSF file (protein.psf) along with the PDB file using the “-psf” option. The PSF file contains information about the bond connectivity of atoms in the system, so if the PDB and PSF files are not created correctly, you will see strange covalent bonds in VMD. If there are no problems with the structure, both PDB and PSF files should be fine. 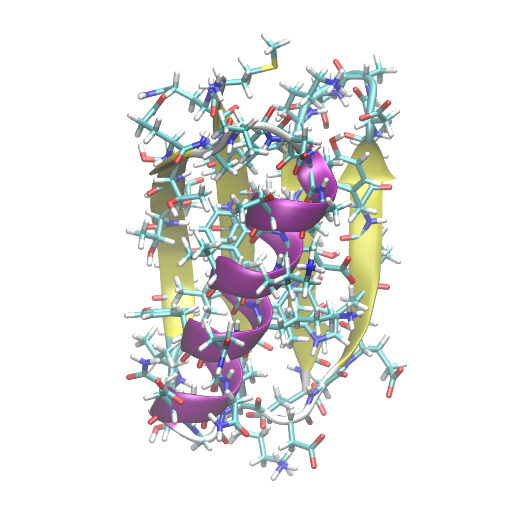 Let’s take a look at the obtained PDB file with the less command. In the system, there are 858 atoms including hydrogen. The segment name “PROA” is written in the 12th column.

Check the PSF file as well. In the header section, you will find “first NTER” and “last CTER“. Here, “first NTER” indicates that the N-terminus of PROA has been capped with NH3+. If you look at the CHARMM topology file, you will see that “NTER” is defined as a patch residue (PRES) that creates an NH3 group at the N-terminus. Similarly, the C-terminus has been capped with COO– using the patch residue “CTER“. In the section right after that, you can also see detailed information about all the atoms, including residue name, atom name, type, charge, and mass for each atom. In the middle section, the bond connectivity is defined. There are 864 covalent bonds in the system, and the bonded atoms are defined by the indices of the neighboring atoms (e.g., 1-5, 2-1, and 3-1 pairs are corresponding to “N-CA”, “HT1-N”, and “HT2-N” bonds, respectively). Lists of angles and dihedral angles are also defined in the same manner. These lists are used for Σbonds, Σangles, and Σdihedrals in the equation in Tutorial 2.2.

In Step 4, we solvate the protein in water. Let’s go to the “4_solvate” directory. Again, a script for VMD is provided here. In the script, we turn on the solvate-plugin, set the input PDB and PSF files of the protein, and add water molecules around the protein with a box size of 64 Å × 64 Å × 64 Å. The “minmax” option specifies the minimum and maximum coordinates of the water box. The output file name is defined with the “-o” option.

Let’s run the script in VMD. As a result, we get wbox.pdb and wbox.psf. In the PDB file, we see that the water residue name is “TIP3”, indicating that the TIP3P water model is used. 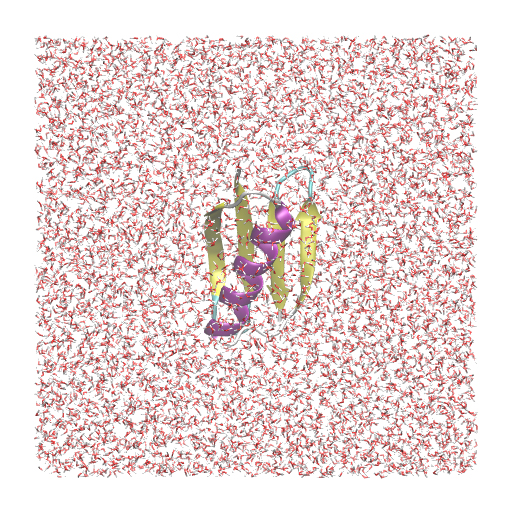 The optimal box size depends on the system and should be determined carefully. Basically, for adequate solvation, the margin between the protein surface and the edge of the water box needs to be wide. One choice is to set the margin size to a distance that is longer than the cutoff distance for non-bonded interactions. However, if the protein undergoes unfolding or large conformational changes during the simulation, such a choice may not be sufficient. This is because a small box allows the protein to interact directly with itself in the image cells under the periodic boundary condition (see Figure (a)). A similar problem occurs when elongated proteins are solvated in a rectangular water box. During the simulation, the protein may rotate, and then self-interactions may occur (see Fig. (b)). Those artifacts can affect the reliability of the results obtained from the MD simulation. This kind of mistake has been frequently made by many people, so please be careful. 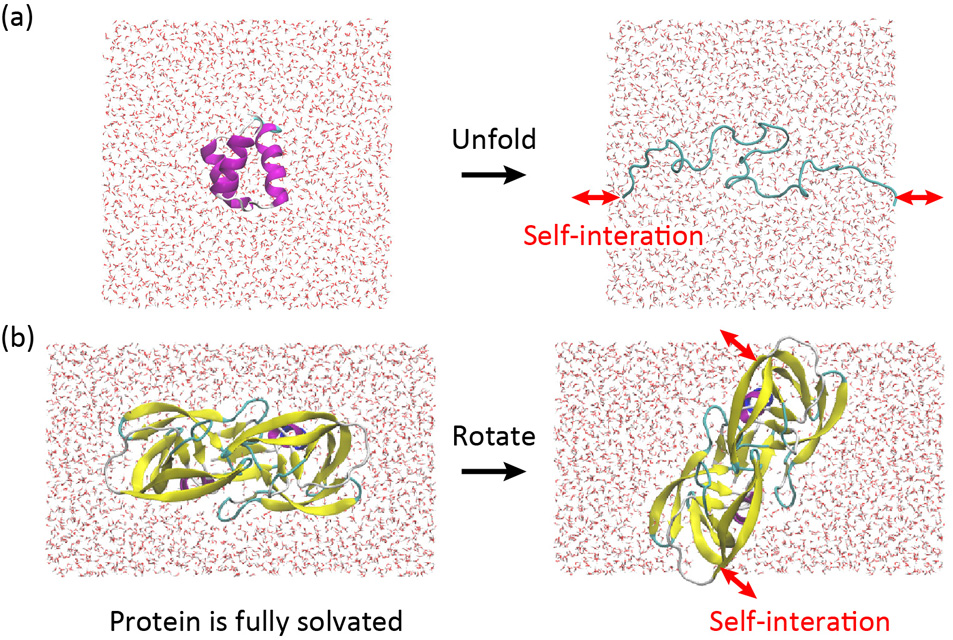 In most simulation studies, proteins are placed in water in which ions are dissolved, i.e., in a solution with a certain ionic concentration. Since the concentration of K+ in the cell is ~150 mM, to simulate proteins functioning inside the cell, we usually solvate the protein in a 150 mM KCl solution [mM = mmol/L (millimoles per liter)]. On the other hand, for proteins that reside outside the cell, a 150 mM NaCl solution is usually used.

To add ions to the system, we use the autoionize-plugin in VMD. Let’s move to the “5_ionize” directory. In this directory, you will find a script to randomly add sodium ions (Na+: SOD) and chloride ions (Cl–: CLA) in the system. The total number of each ion is automatically adjusted to reproduce the specified ion concentration (0.15M). If you want to add potassium ions (K+), specify “-cation POT” in the script. For other cases, please refer to the user manual of autoionize-plugin. 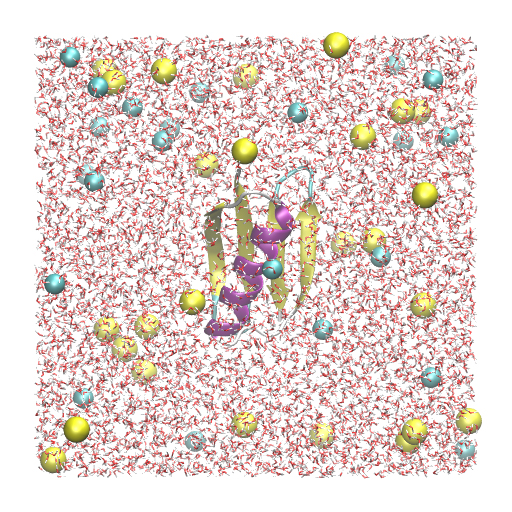 Now let’s count the total number of sodium ions, chloride ions, and water molecules in ionized.pdb to see if the ion concentration is actually 150 mM. To count the sodium ions, we use the grep command to pick up the lines containing “SOD”. You will find 26 sodium ions.

Here, the wc command is useful to count the lines. In the following commands, we first pick up the lines including “SOD” with the grep command, write them in a new file “sod.dat“, and then execute the wc command to this file.

These two commands can be combined via the pipeline “|“. Piping is very useful in many cases, and it will be frequently used in our Tutorials. Please, master the piping.

Similarly, let’s count the chloride ions and water molecules in the system.

Now, we have completed Tutorial 2.3. Let’s move on to the Works directory and take a look inside the directory again. At the moment, we can see that the directory related to the tutorial is only “tutorial-2.3“. However, you may expect that many directories will be added here. Because the directory name “tutorial-x.x” alone does not tell us what was done inside, we would like to create a “README” file and write a brief description of each directory in this file as a note. In the following example, the text “tutorial-2.3: Setup Protein G in NaCl” is written directly to the README file using the echo command. Of course, you can create the README file using vi or any other editor.

In the previous tutorial, we downloaded the CHARMM parameter and topology files, and here, we learned how to build the initial structure of the target system by using VMD/PSFGEN to create the PDB and PSF files. We note that other tools such as CHARMM [2] or CHARMM-GUI [3] are also useful to create PDB and PSF files. We are now ready to start the MD simulation. These four files (PDB, PSF, parameter, and topology) are used as the inputs of GENESIS. In Tutorial 3, we will learn how to execute GENESIS. The system constructed here will be simulated in Tutorial 3.3.